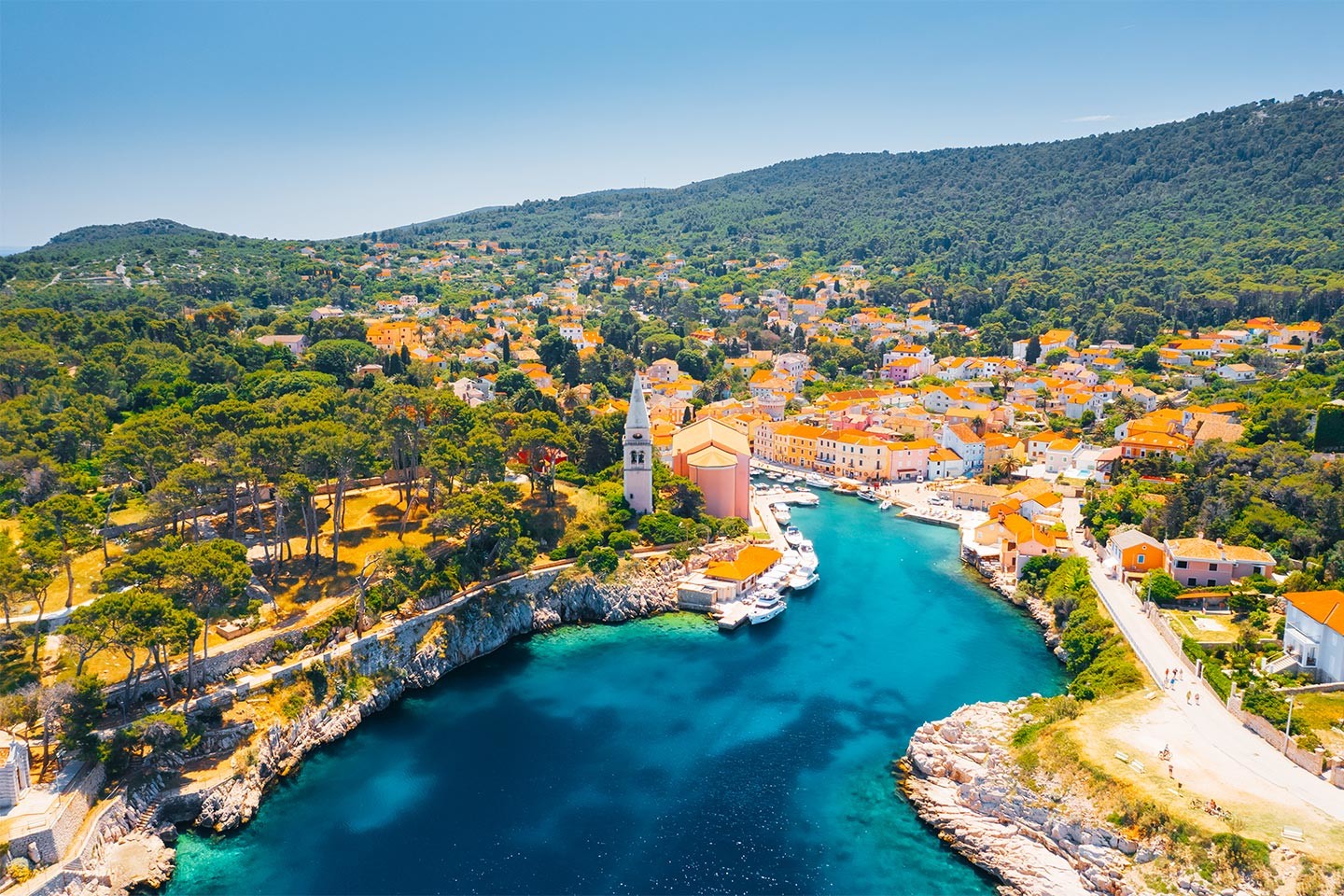 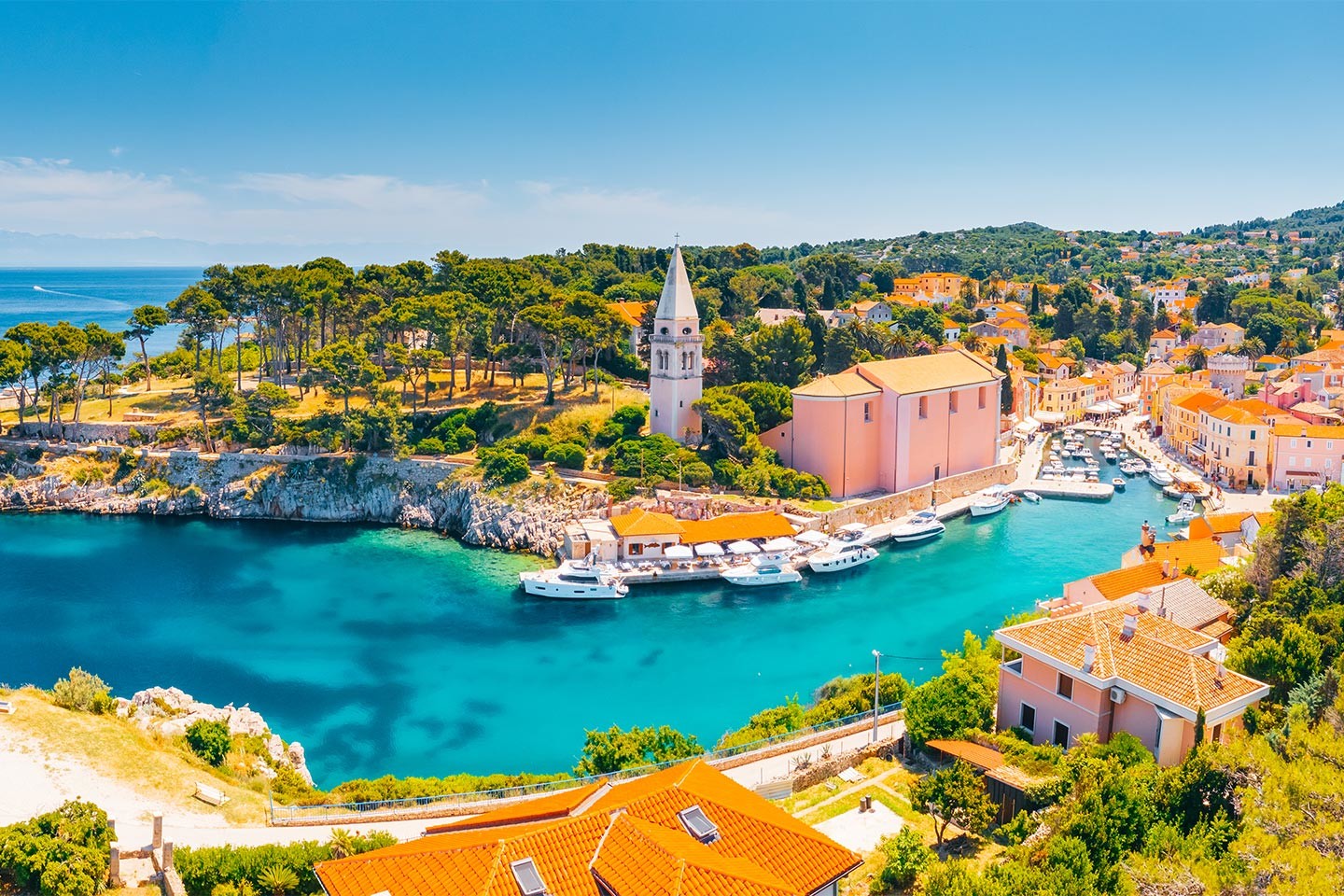 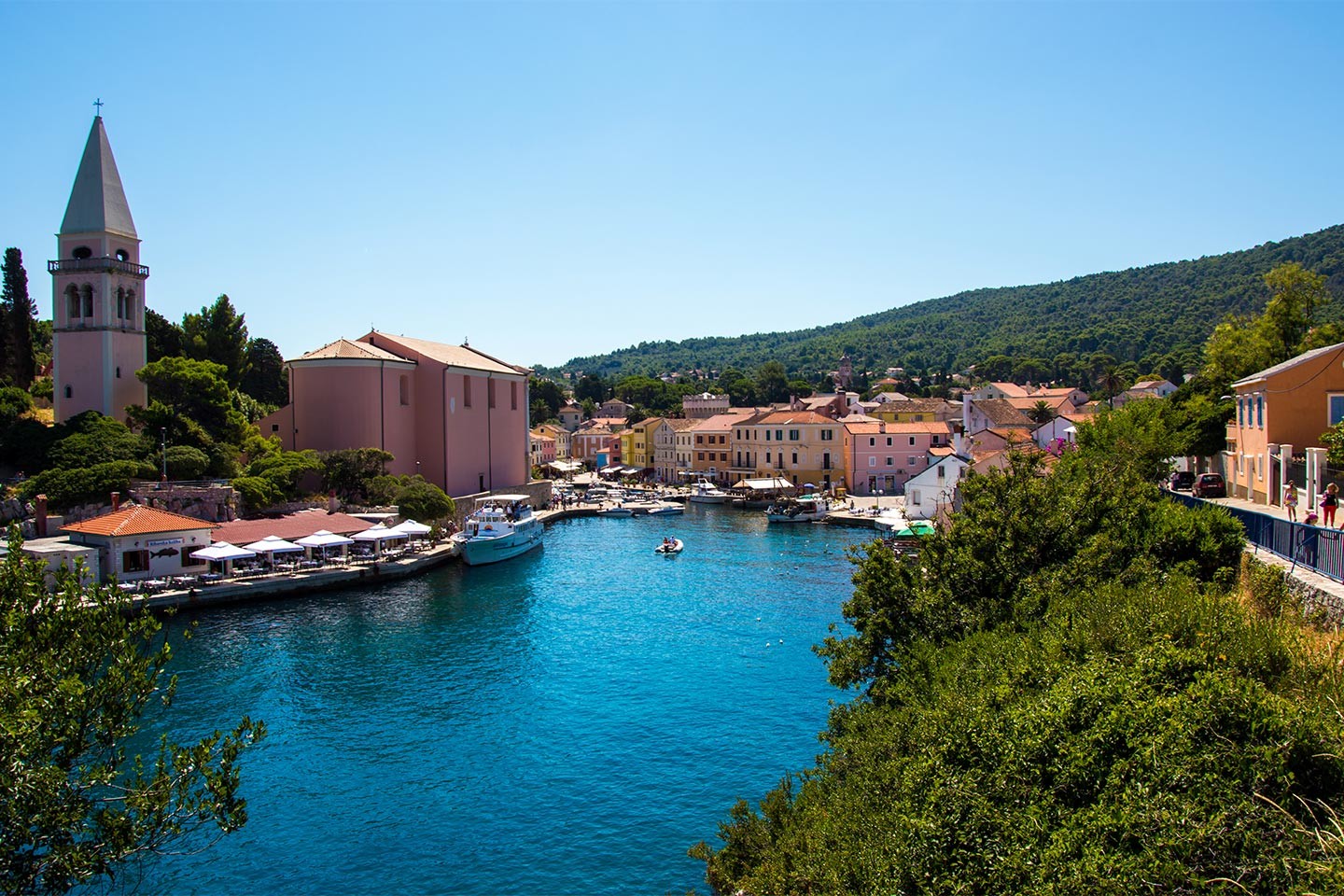 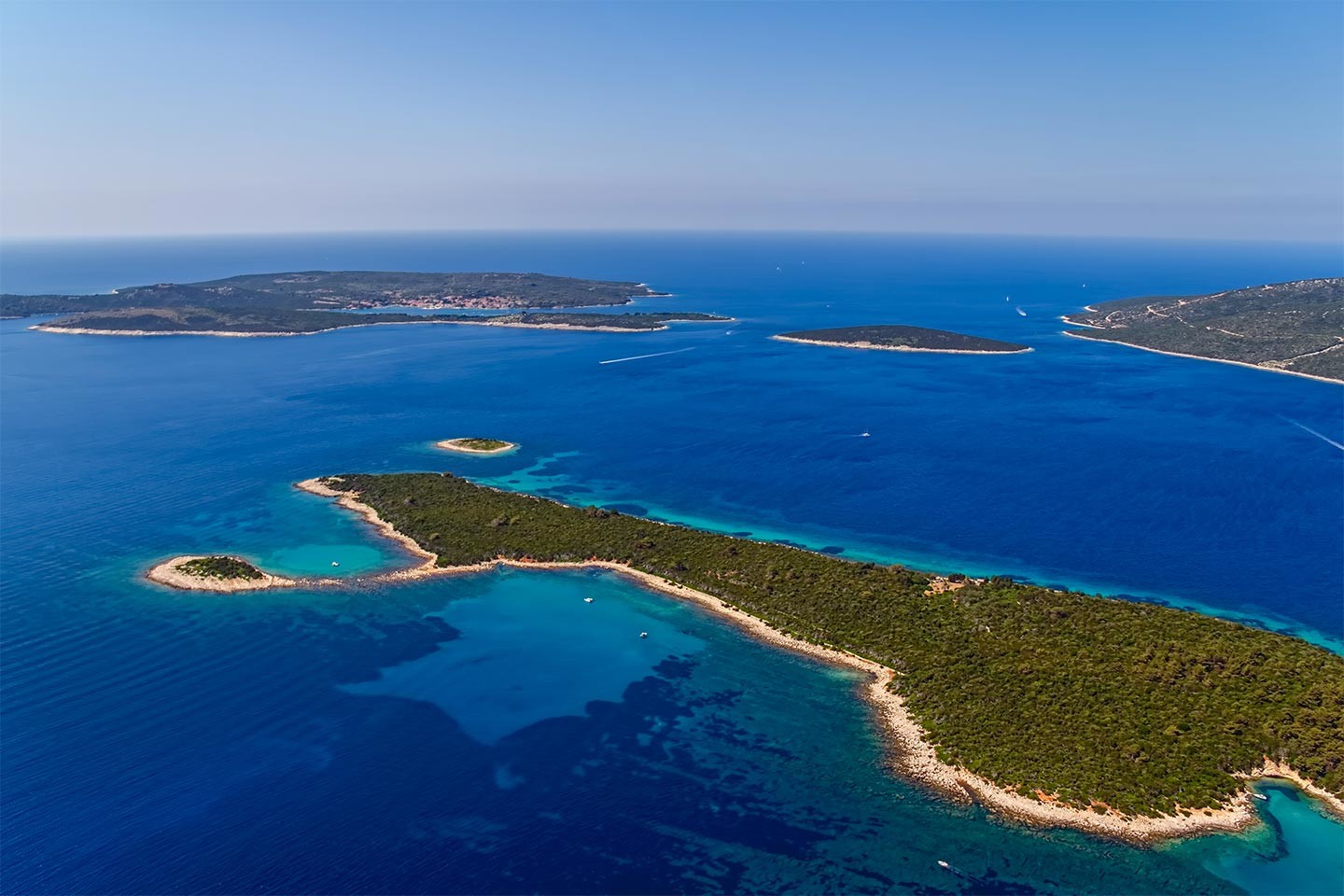 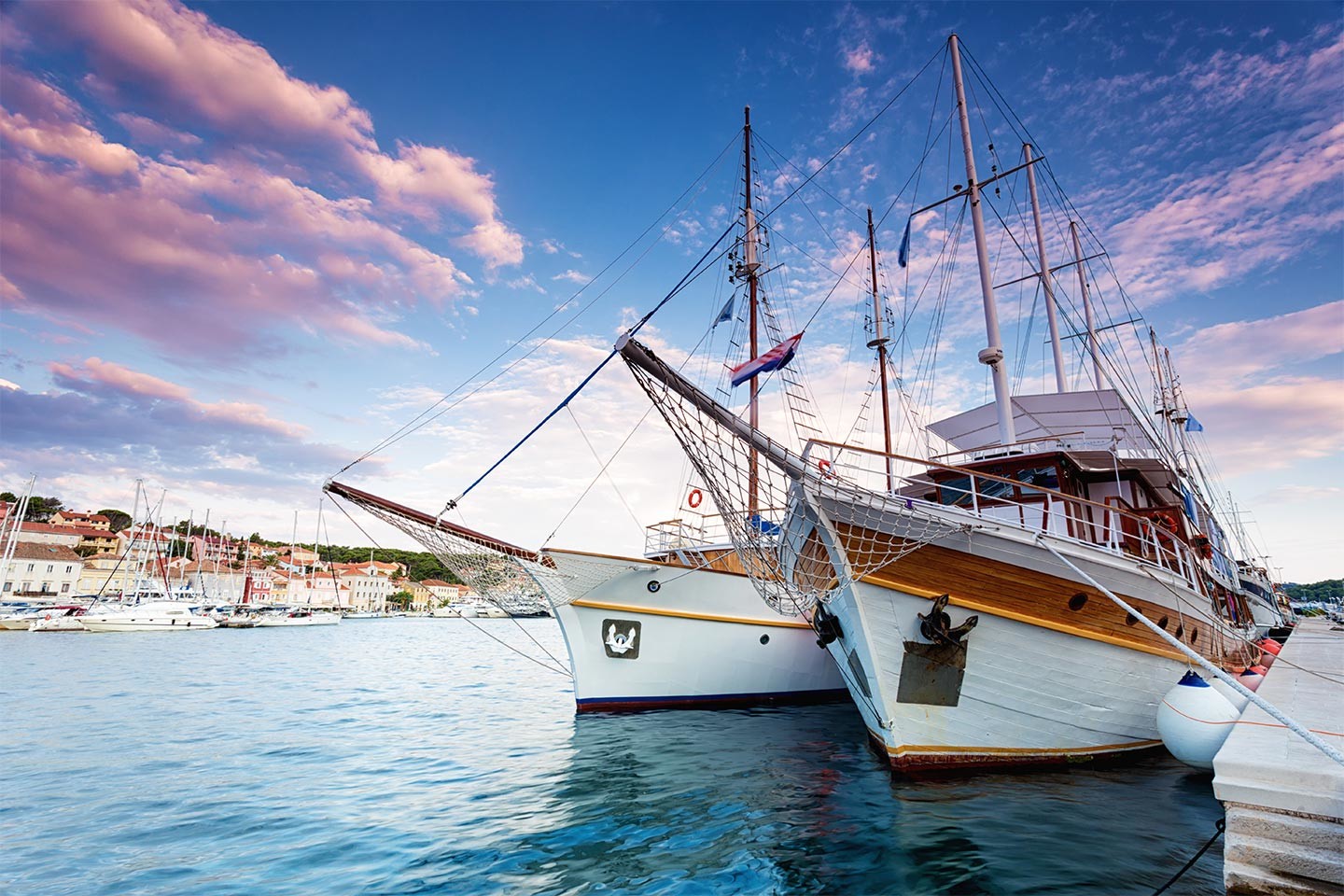 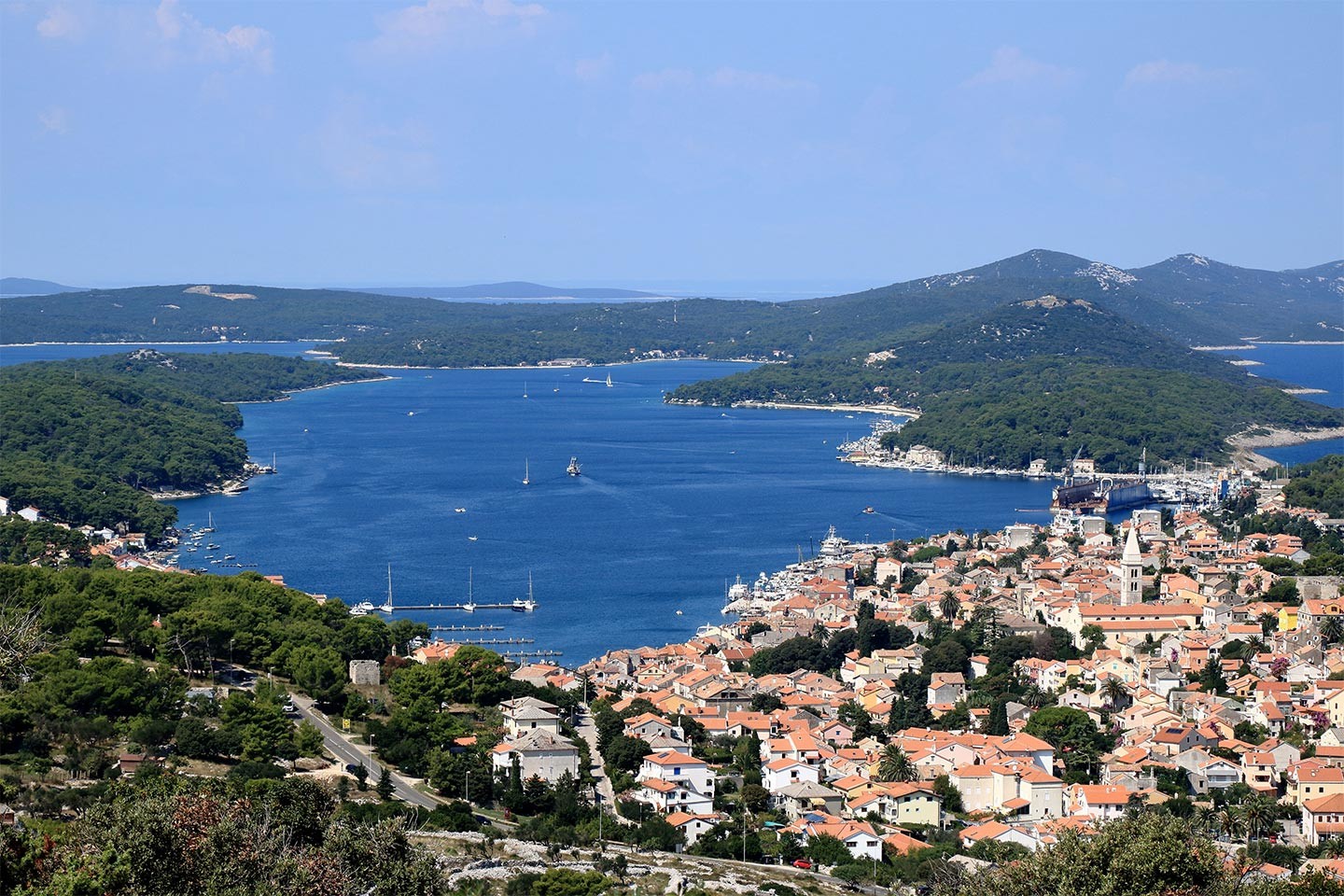 The area near the island is inhabited by a colony of rare dolphins that are one of the most important symbols of Losinj. Furthermore, there are tourist trips on a daily basis to the most comfortable sites to observe this...

Our second charter basis is located in Losinj, a magical island in the northern part of Adriatic sea known for very rich history and culture, but also beautiful beaches and relaxing atmosphere this island offers in any time of the year. One of the first natural goods of this island is the highest point of the island called Televrina Mount from which you can see all the island with its nature reserve on the south.

The area near the island is inhabited by a colony of rare dolphins that are one of the most important symbols of Losinj. Furthermore, there are tourist trips on a daily basis to the most comfortable sites to observe this unbelievable animals.

When it comes to historical part of Losinj, one shouldn't forget the symbol of Losinj – a huge statue of Apoxiomen that dates back to the Ancient Greece. It is very important because it shows how early this island was inhabited and how old this area actually is. It even got its own museum that has quickly become one of the most important island attractions – it tells a special story about how the statue got found and how much it means to the island population and Croatian population in general.

Another great thing about Losinj is that it is called the island of vitality. It is considered to have special health benefits because of the combination of fresh air mixed with sea salt and pine trees. With numerous species of medicine plants, fresh air and mesmerizing pine forests, there are a lot of reasons why you should visit the ultimate Mediterranean paradise! There is also an island garden with more than 250 species of medicinal plants that tourists are just thrilled with, not only because of the rich flora, but also because of unique drystone wall surrounding the plants and breathtaking views on other islands around Losinj. 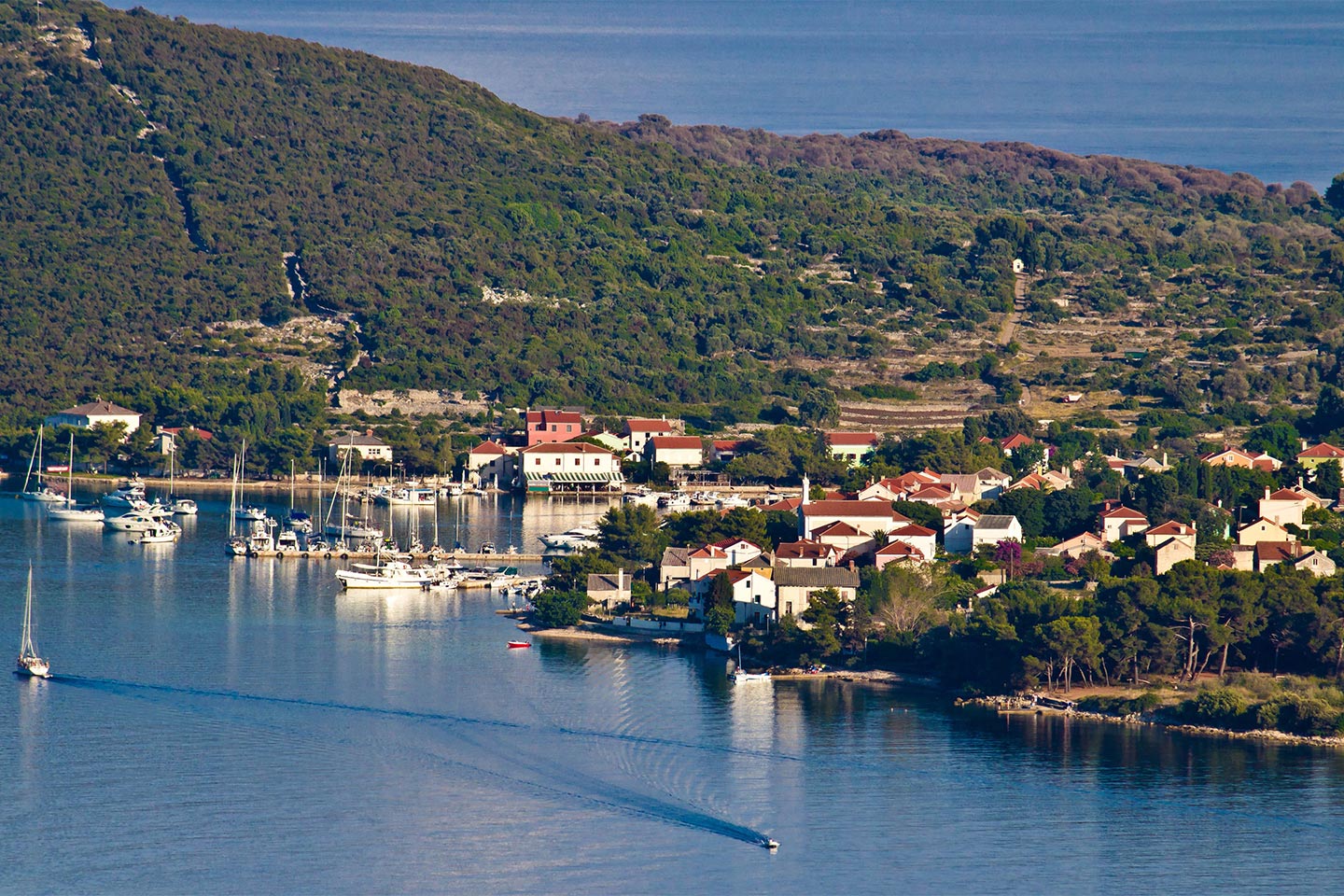 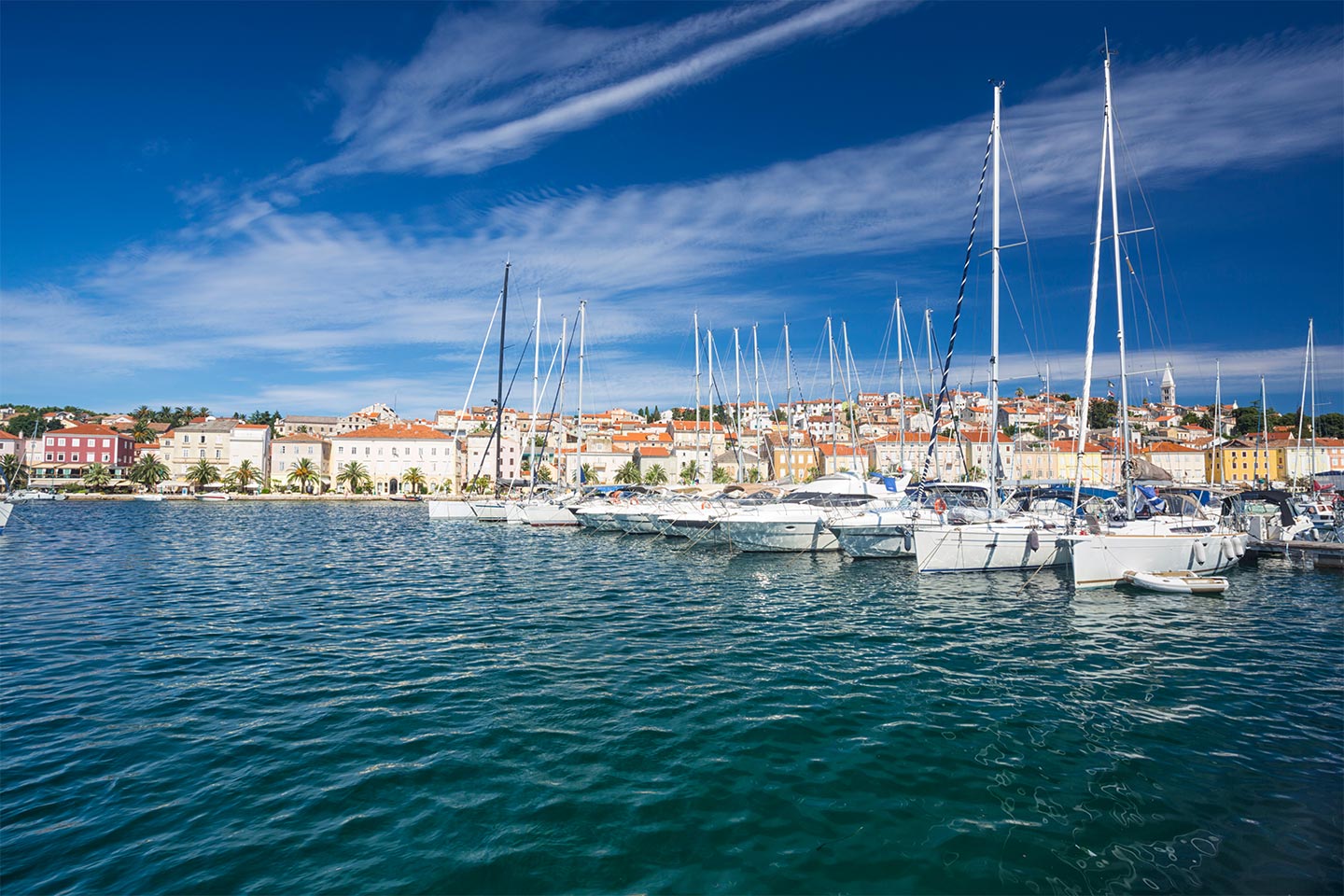 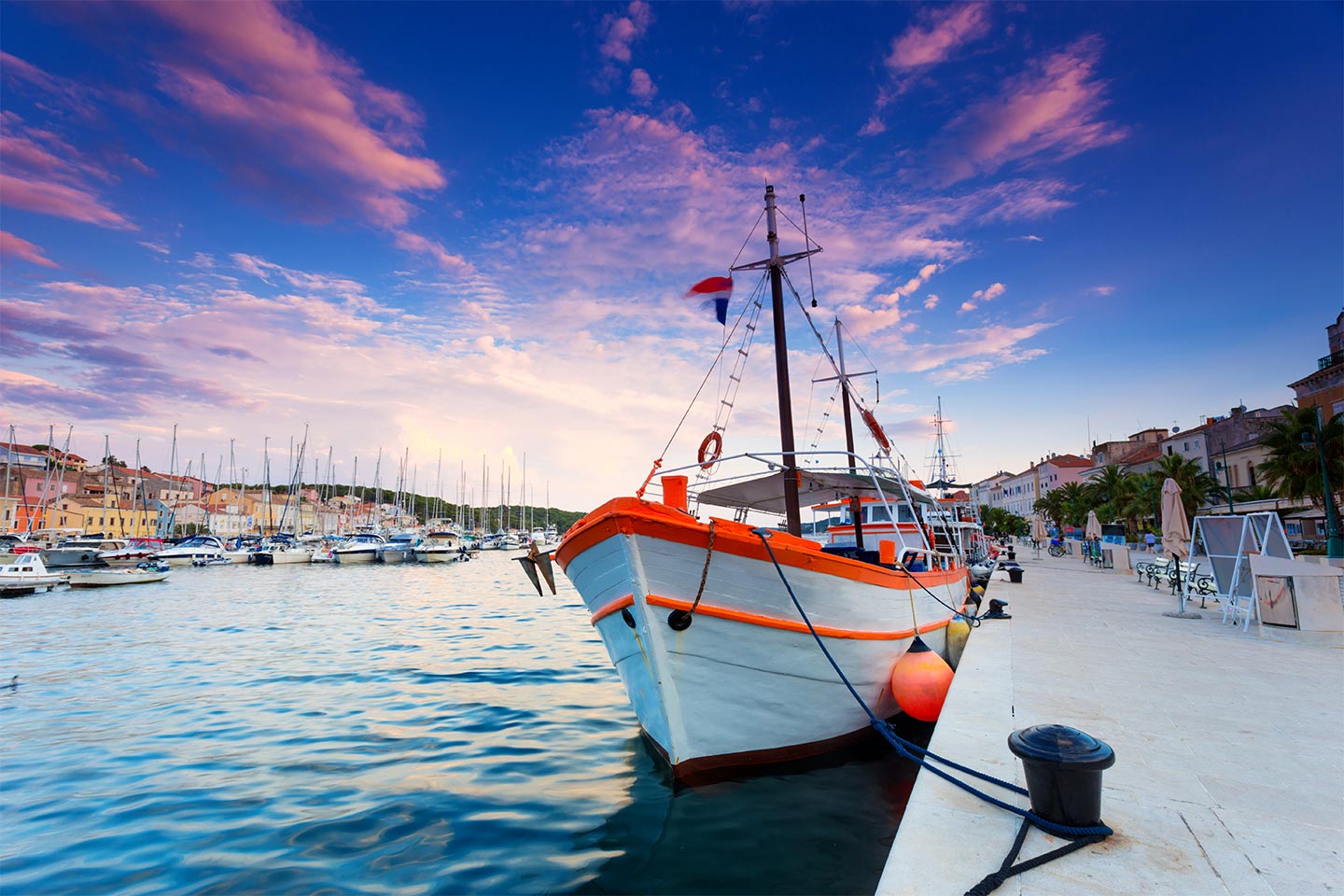 Since we are getting closer to our final few destinations when it comes to northern part of Adriatic, it is crucial to mention another important location that is also the biggest island in Adriatic sea – Krk. Krk is one of the most significant Croatian islands when we are talking about the diversity of Croatian culture. Various literature in the Glagolitic alphabet was created and also preserved here - Bascanska tablet is one of the oldest preserved texts in Croatian so you would basically be visiting one of the cradles of Croatian culture here!

Krk is very special for its beaches, especially in Stara Baska – this location is full of mesmerizing and calming sceneries and tourists adore it so it's often overcrowded during summer, but definitely worth a visit, especially because it's really easily reachable with yacht!

We really hope that you could imagine all the phenomenal sceneries and picturesque locations you will be ready to conquer with Jadranka Yachting as soon as you set off on an amazing journey with us all across Adriatic sea. Don't be afraid to embrace our ideas and implement yours because the beauty of Jadranka Yachting is that we just love new things and new ways of discovering how beautiful Croatia is. And believe us, there is no better way to do that but to explore with one and only – Jadranka Yacthing!

One of the Most Beautiful Archipelagos in the Adriatic

The island of Losinj is part of the Cres - Losinj archipelago, the biggest group of islands in the Croatian Adriatic. The Losinj islands comprise Losinj, Unije, Ilovik, Susak, Vele Srakane, Male Srakane and 30 other smaller islands, islets and rocks.

Mali Losinj is the biggest town on the Adriatic islands, well known for its long tourist tradition. The fact that you can find an isolated beach far from the stress of civilization by taking a 15 - minute walk from the town centre makes this place special. The Mediterranean brings its scents and beauties closer to Europe, and the specific climate characteristics make these islands a perfect place for a holiday throughout the year. Small picturesque towns, gravelly beaches, numerous green paths and promenades, fine restaurants by the sea and cafés on the quay, comfortable hotels and hospitable people are reasons enough to spend your holiday on Losinj!

The historical name of the archipelago - Apsyrtides - is associated with a legend about a mythical hero called Apsyrt, who his sister Medeia had killed. She threw parts of his body into the sea and they turned into the Apsyrtides Islands. The history of the oldest settlements on the islands (Lubenice, Osor, Beli) goes back over 4000 years, and the Roman town of Osor was the Bishopric seat in the 9th century. Having been practically uninhabited until the 13th century, by the 19th century Losinj developed into one of the leading regional maritime forces, and the town of Mali Losinj became the second most important harbour in the Mediterranean, after Trieste. The people of Losinj were esteemed as the best navigators in the Mediterranean. It was in this era that the architectural appearance of the centre of Mali Losinj was defined, and it has remained almost unchanged to this day.

The first hotel was built in 1887 and called Vindobona , after the Roman name for Vienna. Because of its exceptional climate characteristics, Losinj was pronounced a climate health resort, pursuant to a decree passed by the Ministry of Health of the Austro - Hungarian Monarchy. Losinj became one the favourite holiday destinations among the Austro - Hungarian aristocracy, who built numerous villas and summer residences which still adorn Losinj today. 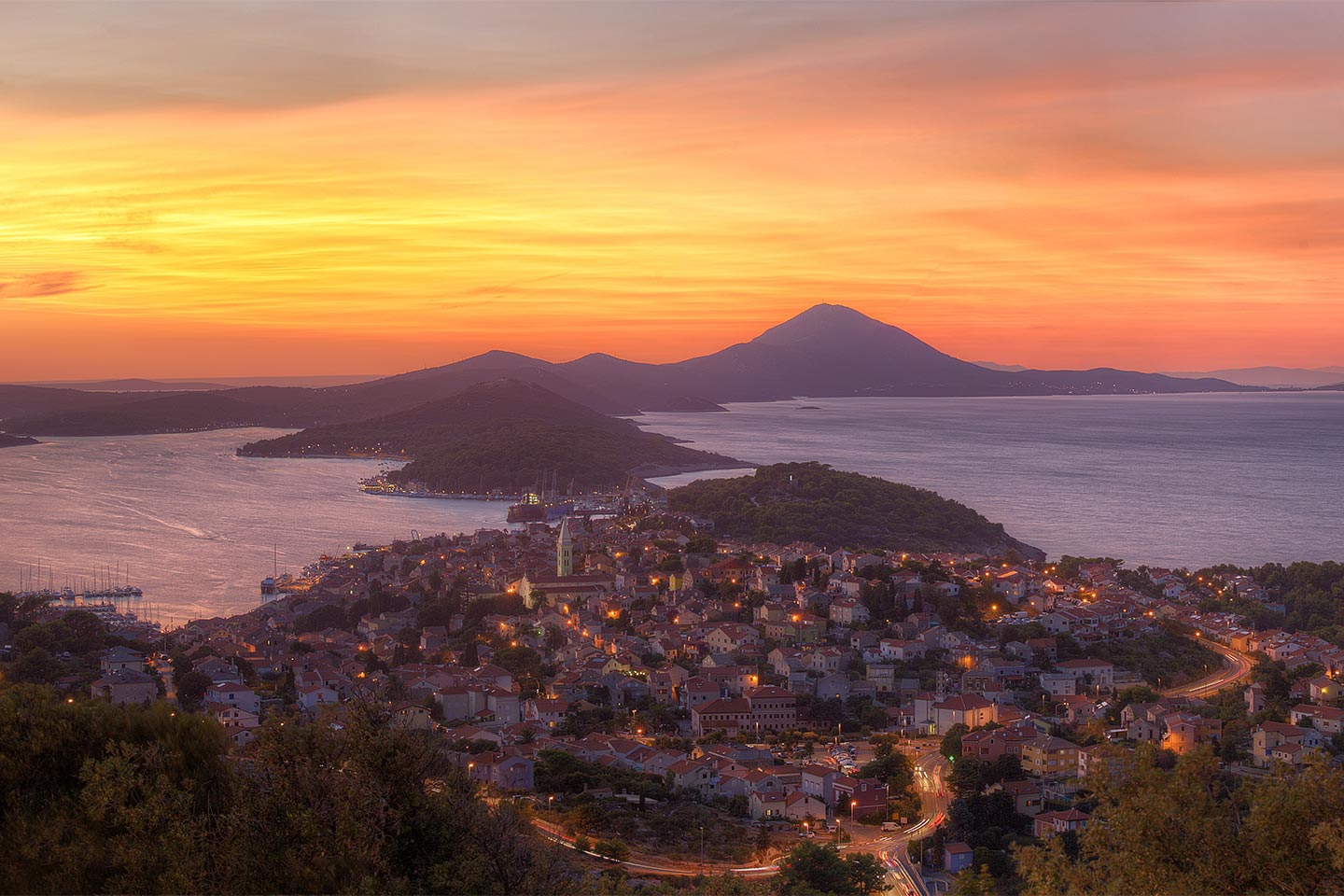 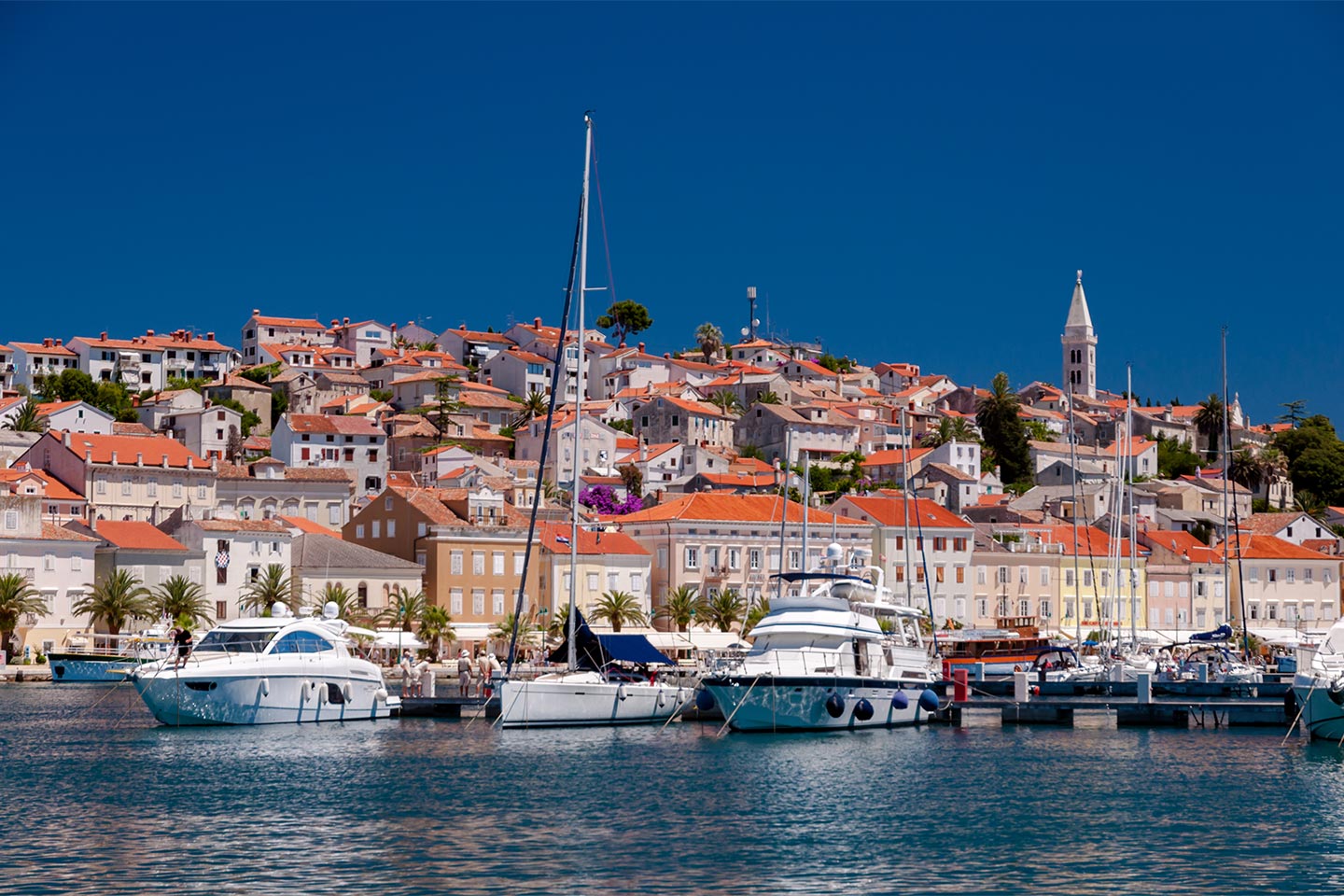 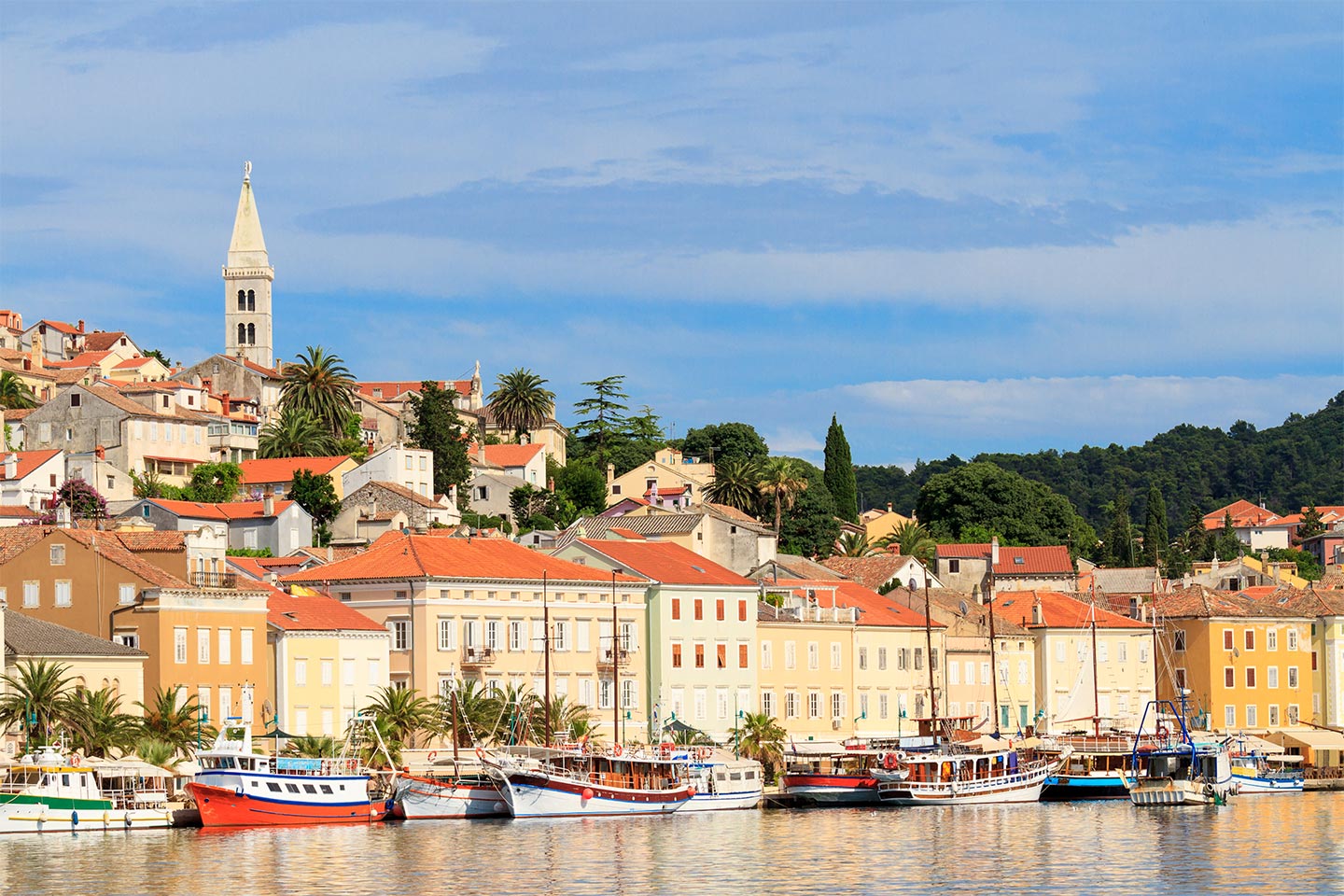 Losinj is a renowned climate health resort because of its climate, which is favourable for healing respiratory diseases and allergies. Temperatures are moderate, air humidity and pressure are stable, fog appears three times a year, and there is a lot of sun. The annual suntime is 2580 hours (the same as Palermo). Temperatures above 30°C are rare, and high pine forests and a sea breeze make summer afternoons very pleasant. The sea around Losinj is the habitat of the last large group of bottlenose dolphins (tursiops truncatus) in the northern Adriatic, which indicates exceptional cleanliness of the sea.

There are 1500 registered plant species in the Cres - Losinj archipelago area - more than all the British islands combined! The special ones among them are the plant species atypical for these latitudes, such as lemon, date - palm, bananas, eucalyptus, cedar and sequoia. Some parts of the natural heritage have been protected as park forests. Cikat, the most famous park forest, was planted in late 19th century by Ambroz Haracic, a professor of the glorious Losinj Naval School, and seamen and captains brought many exotic plants from their voyages, which you can see in Losinj gardens today.

There are no poisonous snakes on these islands. A legend says they were chased away by St. Gaudens, Bishop of Osor and patron of Osor town (11th century).

You can adopt a dolphin and actively participate in their preservation that way. (more...) The large, fresh - water lake Vrana on the island of Cres (surface area 5km2, 74m deep), a unique natural phenomenon, provides the settlements on the islands with drinking water. Despite centuries of exploring, it is still a mystery how that much water can be sustained in waterless surroundings and Karst terrain.

A priceless antique item was found in 1999 in the Losinj sea. It is a bronze, life - size statue of an athlete (Apoxiomen), an original piece made by Lizip, a Greek sculptor, in the 4th century B.C. A copy of the statue is exhibited in the museum and gallery premises of the Venetian fort in Veli Losinj.

How to reach us - Marina Mali Losinj 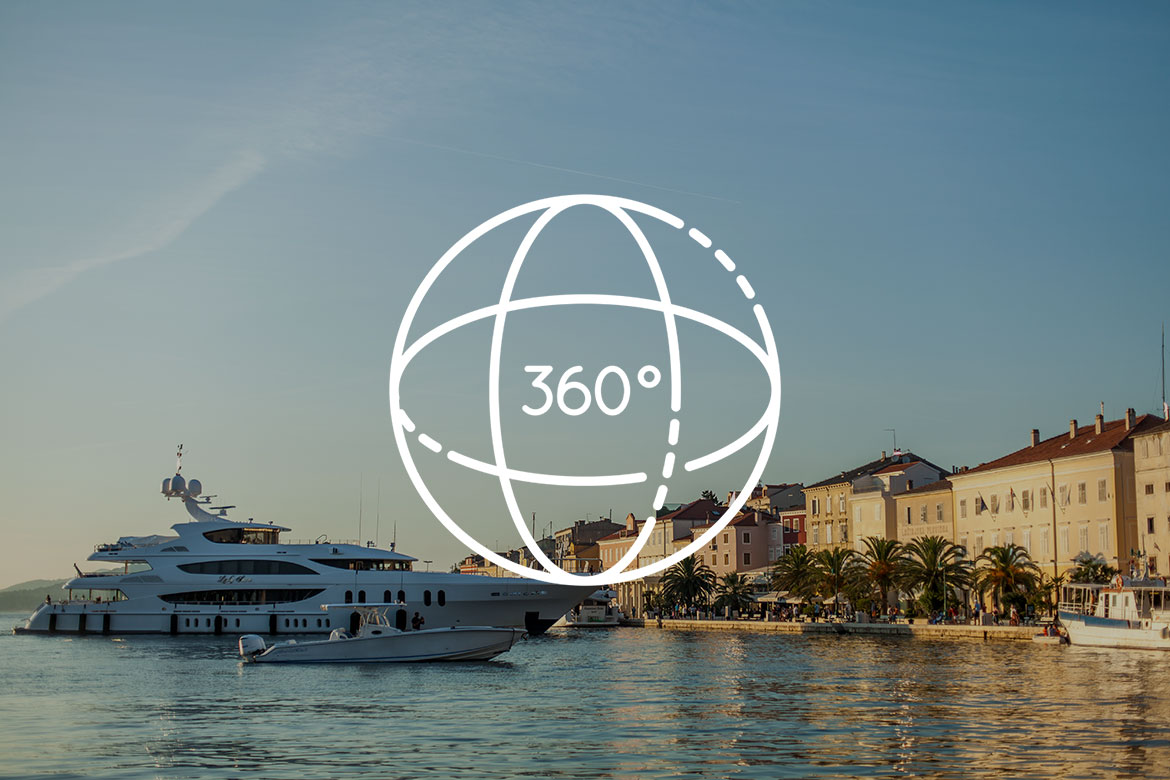 Road traffic connections between central Europe and destinations on the Croatian seaside are improving and being invested in. In the summer months traffic at the border crossings is more intense, which might cause shorter standstills. For entering and driving through Croatia, it is required to posses green insurance card and a valid driving license. Pay toll is paid at highways and three lane two-way roads, as well as at some bridges and tunnels.

Drawbridges
There are two drawbridges on the island, which are lifted twice a day for passage of vessels:
OSOR: 09 a.m. and 5 p.m.
PRIVLAKA: 09 a.m. and 6 p.m.

Mali Losinj has very good connections by ferries and catamarans with cities on the lend. If you plan to come by car, you can choose between two ferries. One is Brestova, 20 km away from Opatija in direction to Pula, second one is Valbiska on island Krk, when you, coming from Rijeka in direction to Split, turn to Krk and cross Krk bridge. If you come from the south, you have ferry from Zadar to Mali Losinj. With catamaran Mali Losinj have all season connection with Rijeka. In high season there are two more catamarans connections, from Venice and from Cesenatico(Rimini, Pesaro). Please click on certain connection you are interested for, and the tabular presentation of the timetable will be shown:

Croatia has a quality and well developed national network of bus lines and schedules, reaching all the way to the smallest towns on the coast. Bus line Rijeka – Mali Losinj operates on daily basis, few times a day, line Zagreb – Mali Losinj two times a day, and in summer season there is a direct line from Ljubljana as well.

The Rijeka Airport is located 80 km from Mali Losinj.

We can organize transfer of our guest from all of these three airports (Rijeka, Pula and Ljubljana) by our own van, minubus or bus, depends on number of passingers. Book your transfer with our van from Rijeka airport, Pula airport or Ljubljana airport to Mali Losinj.

Losinj sport airport (900 m of asphalt - covered runway) has been fitted for international traffic (police and customs) and it is the second airport in Croatia by the number of landings (after Zagreb).